Non-chemical conditioning of water for scale control has been carried out for many years. It has been established that there are a number of ways in which this can be carried out with the most common being magnetic, electro-magnetic, electronic and electrolytic. With these technologies comes a wealth of jargon and explanations using words such as electrochemical, electrostatic and bi-polar etc.

All Physical Water Conditioners endeavour to create the same non-chemical effect for control of the scale. They generate a seed / nucleation point that attracts the elements that produce scale and holds them in suspension. This prevents the hardness minerals from forming on the internal surface areasof the water system, and are instead allowed to flow through the water system and out to drain.

At BrightWater our own chemists spent several years developing the Advanced Crystallisation Process (ACP). The system is based on what has already been scientifically proven in numerous independent studies that Electrolytic technology is the most effective. Electrolytic systems use cathode and anode – usually zinc – to release ions into the water stream. These ions act as the seed / nucleation point to keep the hardness minerals in suspension.

Zinc anodes have been used for many years in the marine industry for control of both corrosion and scale and it was with one of the world’s largest marine anode manufacturers, MME, whom we worked with to develop the ACP. MME now also supply us with our own zinc anodes manufactured to 99.9% purity. 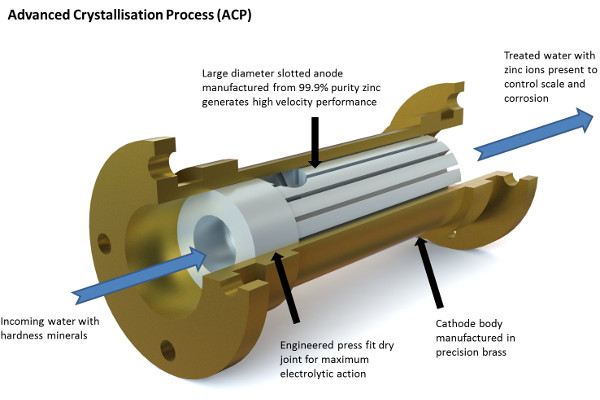 Multiple experiments, research papers and comparison testing have concluded that Electrolytic zinc release out performs all other tested methods of scale prevention in water services. BrightWater successfully demonstrated this to several government departments to receive a grant for final development of the ACP. The government funding also allowed us to work closely with the University of Surrey during final testing.

Reports for the ACP testing conducted on test rigs designed to simulate hot water service systems in a building environment clearly show significant reductions in the scale generated. Ongoing testing in progress at the University of Surrey is producing detailed profiles of the scale reductions in test rigs simulating varying site conditions such as temperature, water volume etc. This information will allow Brightwater’s customers to better informed on the performance of the ACP for varying on-site conditions.